National President's Conference
Shawanigan Lake, Vancouver Island, BC
Dates: September 16-19, 2010
"Be Still, and know that I am God "

The Diocese of British Columbia Hosts the

What do 33 women representing dioceses from British Columbia to Newfoundland do when they get together? One thing they don’t do is “nothing!”  Each woman, chosen to represent her diocesan ACW (most of them Diocesan Anglican Church Women Presidents) came with anticipation, excitement and openness to the theme “Be Still and Know that I Am God” September 15th to 19th and an eagerness to learn and share.

The theme, location, theme speaker and flow of the weekend were the responsibility of the hosting diocese – us! – the Diocese of British Columbia.

ACW diocesan President, Canon Barbara Coleman began gathering the organizing team well over a year before the Conference and planning started soon after that.  And what a team it was under her gentle yet excellent leadership!  We came from all over our diocese: the Reverend Lyn Oldale (Chaplain); Alice Trueman (Travel Co-Ordinator); Carole Gill (Treasurer); Gail Crawford, Katharine Ellis and Jane Fowler, Carole Gill, Gloria Hockley, (all-around-ministers-of-detail) and the Reverend Dr. June Maffin (theme speaker).

Anglican women from all over the diocese contributed their time, talent and energy: providing linens, transportation, goodie-bags, billeting and some crafted unique one-of-a-kind Spiritual Journals for each Conference participant.  Bishop James Cowan hosted a wine and cheese party on the first night, shared worship leadership with Chaplain Lyn Oldale at various times throughout the weekend and spoke about the process of our diocesan restructuring.  Truly a widespread diocesan effort welcoming the national ACW Presidents and Co-ordinators to our diocese!

The lovely setting of the Easter Seal Camp offered a quiet place among the trees and beside the calm Shawnigan Lake while Camp Manager, Norm Magee and his staff provided superb hospitality and delicious food (lots of fresh local fruit, homemade soup, prawns, roast beef, chicken cordon bleu) that never seemed to run out.

The entire weekend (including the AGM business meeting) was enveloped by a special experience of the Eucharist that began on Thursday evening (the Gathering of the Community), included a renewal of baptismal vows and a special liturgy (welcoming the Sabbath) and concluded Sunday morning (with the Eucharistic Prayer of Thanksgiving and the Dismissal).  Sharing from personal moments in her faith journey, our Chaplain’s homilies wove the theme of “be-ing” throughout the four days in her reflections about letting-go of unnecessary detail, unconditional love and inner strength in our daily be-ingness.

The theme of the four days began on Thursday night as Theme Speaker, June Maffin shared her story of being with God during the five years of recovery from mercury poisoning, how her “Soulistry” ministry (www.soulistry.com) evolved from that ‘still’ time of be-ingness, and sent participants off for the evening with a bedtime story about Sunny which reinforced the ‘be-ing’ theme.

A Theme Session Friday morning on “Be-ing Playful” had participants playing with water and chalk, making beautiful bookmarks and envelopes (used to hold a letter to themselves which they wrote during the weekend and which will be mailed to them at some time in the future), laughing and getting to know one another and learn about the ministry of the Anglican Church Women across Canada.

Saturday afternoon, participants had an experience of “be-ing tourist” as they toured the Cowichan Valley, visited the Cultural Centre in Duncan and listened as a First Nations Elder spoke of legends that explained the aboriginal history and unique culture of the Cowichan Valley.

Even the business part of the conference (the national ACW’s AGM) shared in the “be-ing” theme of the weekend as each session became a time of “Be-ing Community” and elections, deliberations and decisions were made: Terri Parrill (Diocese of Western Newfoundland) was acclaimed President; Delorie Walsh (Diocese of  Calgary) was elected Vice-President; Joanna Muzyka (Diocese of Athabasca) was acclaimed Secretary; Adelaide Sullivan (Diocese of Eastern Newfoundland & Labrador) continues as national ACW Treasurer; and Marion Saunders (Diocese of Toronto) as outgoing President remains on the national Executive as Past President.  Jacquie Howell (Diocese of Algoma) reported on the establishment of an Anglican Church Women’s Trust Fund under the auspices of the Anglican Foundation and participants offered suggestions on how this Trust might be used. Carol Prysznyk (Diocese of Saskatchewan) noted that enamel pins of the new Anglican Church Women’s logo (to symbolize that all women who worship and serve in the Anglican Church of Canada are Anglican Church Women) could be produced and a Motion to order 500 pins was passed.

Using the 5 Marks of Mission and the 7 recommendations/indicators coming out of the Vision 2019 report to General Synod, Ecclesiastical Provincial groups formed to discuss which of the recommendations they felt their particular diocesan ACW needed to focus on.  While there was strong agreement that Anglican Church Women excel in mission via works, there was a deep sense that improvement needed to be made in sharing their story and talking about God-in-Christ to others as they were not as adept in mission via proclamation of the Word.  Not surprisingly, education and evangelism training were perceived to be the greatest need at this time.

Our Theme Speaker continued the “be-ing” theme with a session on “Be-ing Creative” where participants embellished their own wooden framed mirrors in uniquely creative ways and attached the special “Seeing … Me” meditation Dr. Maffin had written on the back of their mirror.  Each hand-crafted “MirrorMeditation” went home with the creative spirituality artist and will become a gentle and constant reminder that in our very be-ingness, each of us is made in God’s image, are loved, and is an artist.

June reminded us that in our journaling, our instructed outdoor Walk with God, our creativity, fellowship, worship, business meetings, mealtimes, work and times of play during our four days together, we are be-ing … being with God, being spiritual, being ourselves and that it is important for us to remember that we are called human be-ings, not human do-ings for a reason.

Before everyone departed, incoming national President Terri Parrill presented a beautiful, hand-crafted quilt (created by participants at the 2009 national ACW Conference which was hosted by the Diocese of Western Newfoundland) to Canon Barbara Coleman of the host 2010 national Conference - a gift from one diocese to another. It was displayed at the September 22nd ACW gathering at St. John's, Quadra.

So, what do 33 women representing dioceses from coast to coast to coast - British Columbia to Newfoundland - do when they get together?  They play, worship, share in fellowship, make decisions, represent their dioceses with grace, gentleness and courage and demonstrate strong leadership.

As a diocese, we can be proud of the leadership shown by Canon Barbara Coleman and her team in organizing the Conference; we can be humbled by the generosity of spirit by so many behind-the-scenes Anglican Church Women; we can be grateful for the ministry of our bishop who responded to questions about our diocesan situation with transparency and forthrightness; and we can celebrate the women in this diocese who continue the ministry of the ACW in their parishes to the glory of God. 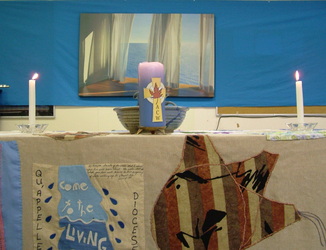 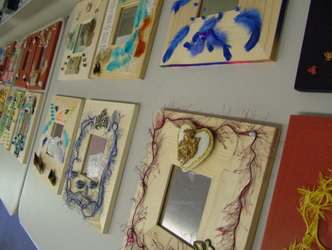 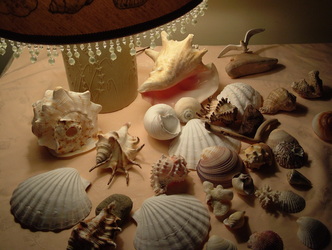 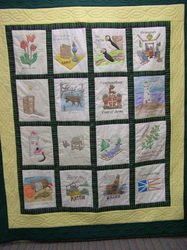 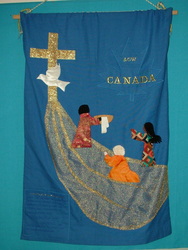 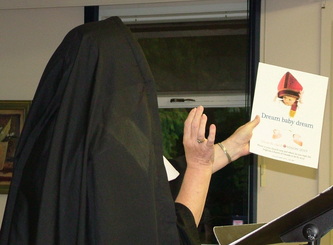 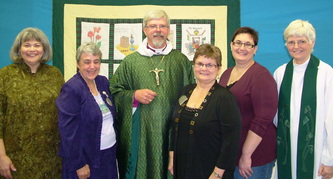 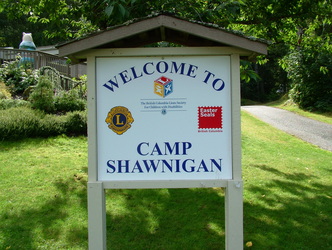 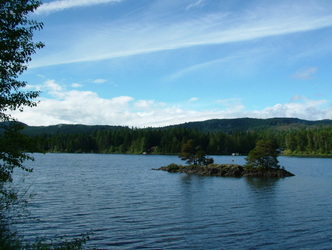 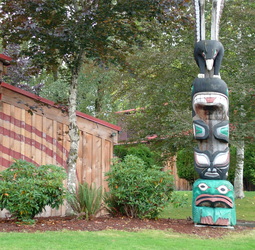